The little bird, the white throated dipper is a very entertaining bird.
People who know the bird’s behaviour smile in recognition when one refers to the bird’s one-man show.
The white throated dipper is Norway’s national bird.
When winter is hard in Norway, the dipper flies on holiday in Denmark. Ornithologists will probably express it differently, but I like the idea that the bird keeps a well-deserved holiday in a mild climate.
Besides the current Norwegian name Fossekall; ‘Waterfall Call’, the dipper has many dialect names in Norway.
Among these are Elveprest; ‘River Priest’ and Kvemkall; ‘Mill Shell’.
The dipper has at least 70 different local names in Norway, and at least 50-60 are known from Sweden. 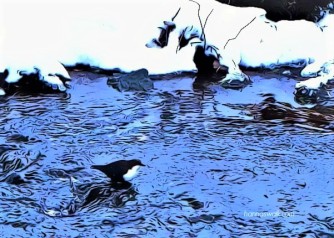 NOTE
You can read much more about the bird on Wikipedia and listen to its song.

23 thoughts on “The Tail-Wagging Bird”